Innings Festival has become a staple of spring in Arizona, bringing a music festival to the home of Cactus League spring training, with big-name bands AND big-name players. Here’s what it’s like and what you need to know to make the most of your time at Tempe’s Innings Festival.

Tempe’s Innings Festival is where baseball meets a music festival

The two-day event is a well-run music fest of its own merit, with the added factor of baseball throughout – from player appearances to activities to the name of the festival, it’s everywhere. If you ask me (and I suppose you are, if you’re reading this), it’s the best of both worlds.

Dave Matthews Band and Weezer headlined 2020, with lots of other gems in the lineup. Check out the 2020 Innings Festival review here.

It was a special treat as Eddie Vedder, a well-known and long-time Cubs fan, closed out the show in 2019. I didn’t think I’d ever see him play live solo, and I certainly didn’t expect to see Cubs manager Joe Madden on stage with him for a glass of wine. His set was perfection and everything I didn’t know I needed.

You can find all information on permitted and prohibited items here.

If you want to get in the mood for the festival, or get to know the artists you haven’t heard before, here’s the Spotify playlist for you! Full festival lineup and schedule below.

Guest Services is your go-to for accessibility information (located at both entrances), from the lay of the land to ASL interpreted performances. You can also email access(@)inningsfestival.com with questions.

There is a dedicated Accessibility Lane on entry. ADA drop-off and pick-up is on Ash Avenue between 3rd Street and Rio Salado.

My first Innings Festival fell during recovery from ankle surgery and I found the accommodation to be among the best I’ve seen in large events. All staff actually knew the ADA information, including where the handy extra ADA restrooms were, and were incredibly helpful. It was fairly easy to get between stages, albeit tougher as the crowd grew.

HOWEVER. Getting between the stages is not the easiest. The grounds are a bit hilly and there’s an area filled with rocks. Unfortunately, they gate off the paved walking path to reserve it for carts moving between stages. This is a huge issue and I hope it’s addressed in future events.

The lineup is always a good mix and split between two stages (Home Plate and Right Field). They are close enough together to walk between easily without missing any sets. They also schedule the start times without overlap (so you don’t have to choose between artists)!

This year’s headliners are Dave Matthews Band and Weezer, and I’m excited for Portugal, The Man, O.A.R. and Death Cab. You can see the full schedule here and the lineup here. Get the official app to have all of it on your phone.

There are both one and two-day passes to the festival, at four different levels: GA, GA+, VIP and Platinum. These range from $99 (one-day, GA) to $1200 (two-day Platinum). General admission gets you in, with access to the music stages, baseball activities and vendors. As you go up in tiers, additional amenities are included (from shade and seating to full-service bars and air-conditioned restrooms).

Children under 7 are admitted free with an accompanying adult ticket.

Cabanas are the festival’s version of suites, for groups (and with shade). They sell out quickly.

You can get Innings Festival tickets here.

And it wouldn’t be a baseball event if there weren’t scalpers lining the streets as you walk up trying to sell what they have – you can try your luck, but it’s likely you’ll overpay and not know if it’s valid until you try to go in. There are verified reseller options on the ticket sales page.

Tickets are issued in the form of wristbands. Wristbands must be activated (best to do it before you head out and fight for signal with everyone else on their way into the fest).

You can also connect cashless payment to your wristband, meaning you just have to tap it at vendors to pay. You can connect a Paypal account or a credit card (this is also better to do in advance). Unlike other places where you load money on a wristband and have to try to get leftovers back, this is a conduit for payments, so there’s no follow up.

As always, there’s an app for that. The app is the best way to interact with the schedule (and keep it in your pocket). There’s also a new Curveballs section this year with baseball and music trivia. And yes, there’s WiFi at the festival.

There are five main baseball activities at the festival. These are in Left Field at the festival and most are running during all times gates are open, with bonus player appearances on the schedule (see schedule for time slots).

Off the Mound with Ryan Dempster is a talk show, hosted by 2x All-Star pitcher Ryan Dempster (and fan-favorite former Cub, even if he got his World Series ring with Boston, he deserves it). Fans can catch this in Left Field at 3:30 and 5:45 on Saturday and 4:00 and 6:30 on Sunday.

Batting Cages will be open to get some swings in. Player appearances this year will include Kenny Lofton, Eric Davis, Ian Happ, Aaron Rowand, Wally Joyner, Shawon Dunston, Miguel Montero and Jim Thome.

Game Saving Catch is a skill activity and a photo opp. You jump for that save of a catch (don’t worry, the ground is padded, so you’re safe from grass stains).

Home Run Derby VR is exactly what it sounds like – a virtual reality version for fans to swing in their own derby.

Speed Pitch is where you get a chance to check your fastball. Player appearances this year will include Jake Peavy, Trevor Hoffman and Bret Saberhagen.

Festivals are notoriously rough on the environment, but Innings has been working against that for a while. There are hydration stations with filtered water to reduce single-use plastic for water (you can #BYOBottle or hydration pack, or get a reusable bottle or cup at the event).

For 2020, they have started a new Rock & Recycle Program, where people who fill a bag with recyclables during the event are rewarded with a commemorative t-shirt and entered to win tickets for next year’s event. Info at the Rock & Recycle Center by the Home Plate stage.

Cycling to the fest (and other eco-friendly transportation options) is encouraged, and rewarded with the bike valet at Bike Parking.

We’re giving you 3 easy ways to go green at #InningsFest. Click the link below to learn more about #BYOBottle, Rock & Recycle, Reusable Cups and eco-friendly ways to get to the park. https://t.co/f8v1l5zgaf pic.twitter.com/fYA51CauCM

Food at the festival

There are several local food vendors at the festival, including vegetarian and gluten-free. I’m most looking forward to Island Noodles, who are also a vendor in Scottsdale Stadium (spring home of the San Francisco Giants).

Other things to do at Innings Festival

Beyond baseball and music, there are more vendors and areas to check out. Like the Zia Records Pop-Up, which will including artist signings (Zia Records is a staple in the Arizona music scene and has been the place to go for music since they opened in 1980).

Getting to Innings Festival

Tempe Beach Park is easy to access from all over the Valley, right off of several freeways. However, parking near the festival is tight (and much of the close parking is in paid garages). There are also metered street parking options, and if you go a bit further away, you may find free parking.

Bike parking, however, is bountiful. West of the main entrance is a complimentary bike valet and Bike Parking area (hosted by Tempe Bicycle Action Group). Bring your own lock.

ADA drop-off and pick-up is on Ash Avenue between 3rd Street and Rio Salado. 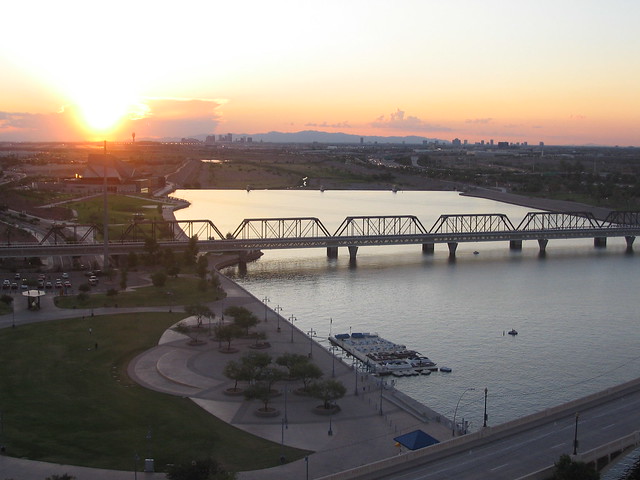 Where to stay in Tempe for Innings Festival

There are a ton of options for places to stay in Tempe, but it’s all about location. Tempe Mission Palms is a classic option, very close to Mill and with a beautiful property. You can’t get any closer to Tempe Beach Park than Stay Alfred. And there’s an Aloft just across the water that is beautiful and modern.

Check here for the best rates and availability in Tempe.

Other spring festivals in Arizona

While Innings Festival might be the best spring event in the Valley (especially for baseball fans), there are plenty more events going on in the area in February and March. Here are some more interesting music and food festivals in Arizona to check out if Innings isn’t enough for you.

The Arizona Vegetarian Food Festival is a two-day event in Scottsdale and is 100% vegan. It is focused on growing the vegetarian and green markets and promoting an eco-friendly, cruelty-free lifestyle.

Arizona Roots Festival is a reggae-rock festival celebrating the reggae and roots music and culture. Arizona Roots premiered in Chandler in 2019 and quickly announced 2020 dates following a successful event. It is produced by the same producers of California Roots Music & Artist Festival (running for 10 years).

McDowell Mountain Music Fest (aka M3F) is a three-day event with acts from all genres and is dedicated to community, culture and charity, running in downtown Phoenix for over 15 years. It has a lineup of huge international artists, live art, yoga, drum circles, food trucks, beer by Oskar Blues and a curated market. The festival benefits local charities, including the Phoenix Children’s Hospital.

The Great American BBQ & Beer Festival is an annual event held in downtown Chandler with beer vendors, local BBQ and food vendors, several stages of country music and arts and crafts vendors. There are a lot of (long) lines, so be prepared to get in line for an ID check, tickets, food and drinks, individually.

Below are some of the most relevant and drop a comment if you have questions, thoughts or ideas!

Everything you need to know to plan a Cactus League spring training visit.

All the details about the Cactus League spring training ballparks, current and past.

What to do in Downtown Phoenix, specifically Roosevelt Row.

Where can I find the Cactus League 2020 schedule?

Where are the Cactus League ballparks?

There are 10 Cactus League ballparks in Arizona, located in Mesa (2), Tempe, Goodyear, Glendale, Surprise, Phoenix, Peoria, Scottsdale and in the Salt River Community (bordering Scottsdale). See below for which teams play in which parks.

Which teams play in the Cactus League?

Half of the teams in the MLB (both NL and AL) do their spring training in Arizona.

How do I get tickets to Cactus League games?

Tickets are available online (through the MLB team sites) or at each stadium’s box office. Many games and specific teams sell out, meaning you have to look for tickets on second-hand sites and for scalpers at the game (groan).

Pin to share this guide to Innings Festival in Tempe